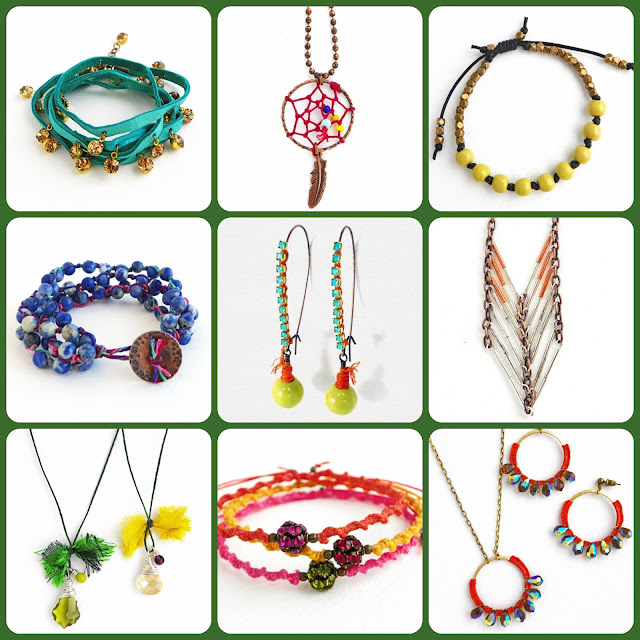 Visit my project gallery on CraftGawker and heart your favorite jewelry tutorials! 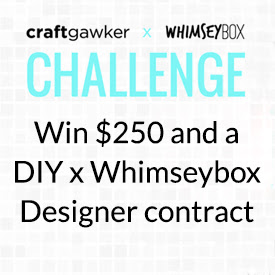 I'm participating in an exciting contest hosted on craftgawker.com! The participant with the most favorites on their craft projects will be entered to win a grand prize of $250, have their winning project turned into a DIY kit to be sold + a designer contract from WhimseyBox.com. Oh, how I would love to win this! It would be a dream come true. This is just the kind of opportunity I am looking for, but I need your help. I can't win it without you. If you enjoy my tutorials and projects, please sign up to Craftgawker.com (it's free!) if you have not already and favorite your favorite jewelry projects! Contest ends July 31st. Thank you so much!
Posted by Erin Siegel at 9:32 PM 3 comments: 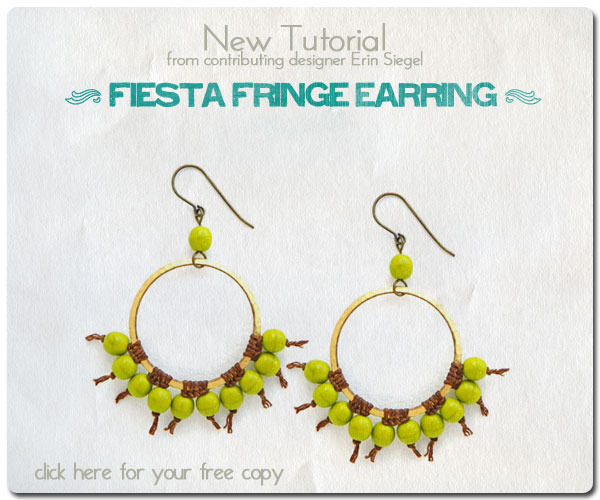 Wear these fun, flirty earrings and you are ready for some Summer lovin' fun. Or of course, a fiesta! The earrings are a slightly different take on my original bohemian knotted earring design. This pair of earrings is my latest design contribution in my line of jewelry projects for Ornamentea.com. Visit my designer page on the website.

Ornamentea is running a special offer with my tutorials this month. Order my book, Bohemian-Inspired Jewelry and receive a sample bundle of my favorite stringing material, Irish Waxed Linen Cord! Hurry, this offer ends July 30th. Ooo...look. A frozen margarita concoction and some colorful party paper lanterns. Party time! These images and the colors just remind me of Summer fun and lively gatherings. I think you can see where I got my inspiration from, can't you?  I made the earrings inspired by a Cino De Mayo fiesta we hosted at our house this year. Yep, these are the photos I took of the party that day and yes, that is one of my specialty frozen margarita drinks. I make a pretty rockin' margarita, if I do say so myself. ;) Okay, before you get your party on, it's time to get your craft on first. Here's how to make the Fiesta Fringe Earrings: 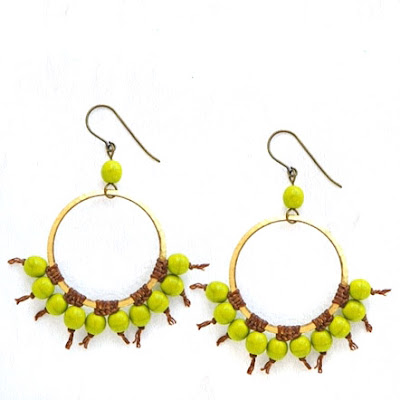 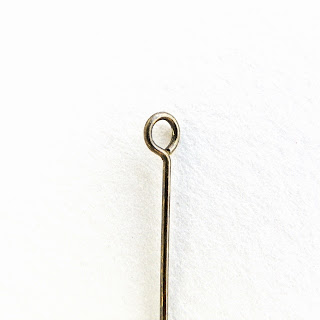 1. Convert the headpins into eye pins by trimming off the heads and creating a loop at one end as shown. 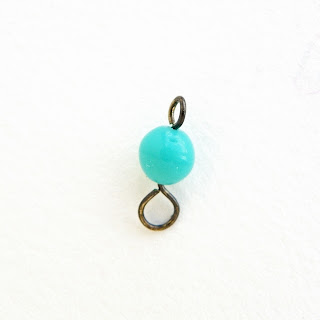 2. String one 6mm glass round; form a simple loop. Set aside. Cut the cord in half. Set one aside. 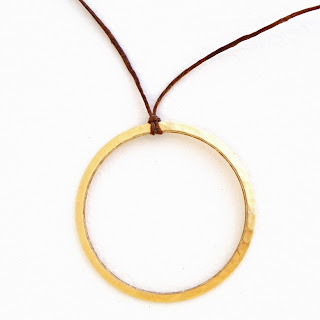 3. Make a 3" fold at one end of the cord. Form a larks head knot around the brass ring as shown. 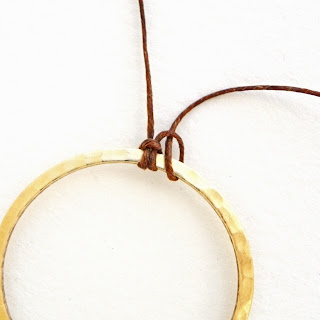 4. Using the long end of cord, form two half-hitch knots around the ring. 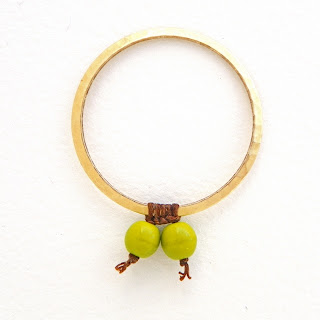 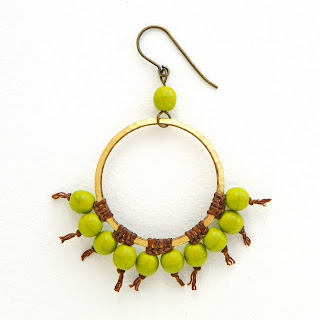 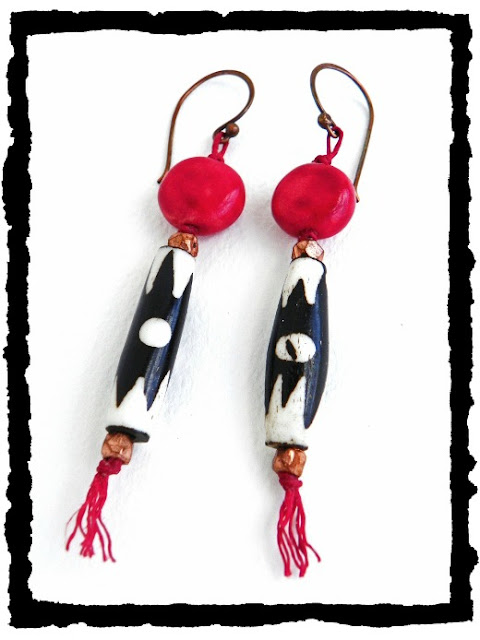 I especially love ethnic, boho looks for hot weather. You can quickly and easily make chic fashion earrings with a few scrap pieces of waxed linen cord. No tools or wire-wrapping skills needed to make these babies! String on some favorite beads, add a few knots and you've got stylish, light-weight and swingy earrings to wear all Summer long. Enjoy!

Tip:
Fray the ends of the linen cord for a fun texture element. To fray ends, simply roll the cord ends between your fingers until the ply begins to separate and pull it apart. 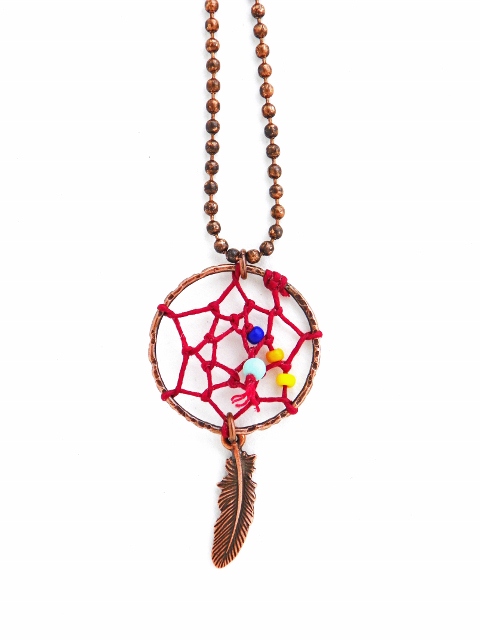 Next weekend I'm taking my 2 1/2 year old daughter to her first Native American Pow Wow. I hope she enjoys the flute music, drumming, dancing, storytelling and crafts. She's already familiar with dream catchers. Before she was born, I was gifted a beautiful dream catcher handmade by a Native American woman I know. It hangs above her bed now.

As long as I can remember, I’ve always been fascinated by the Native American culture. From their deep respect and reverence for nature, to their great spiritual teachings, to their beautiful handcrafts and beadwork. One Native American tradition I have always loved and gravitated towards is the dream catcher.

Today, I’m going to be sharing with you how to make your own dream catcher-inspired pendant to capture the dreams, goals and positivity you want to bring into your life! You will learn the traditional weave to make the web of the dream catcher, then you can embellish your pendant with a variety of beads, feathers and/or charms to represent those dreams, hopes and wishes you want to catch. The finished pendant can be worn on it's own or you can incorporate it into your own beaded jewelry design. The act of making this pendant is a hands-on, creative way to realize your dreams, while making a keepsake with special meaning that you can wear and keep as a reminder of the things that are important to you. But, before I get into showing you how to make your pendant, I want to share with you a little bit about the origins of the dream catcher and a Native American dream catcher legend. I hope you will find this to be fun, informative and inspiring!

Origins of the Dream Catcher:

The Ojibaway or Chippewa were the first to design these decorations to protect their babies against bad dreams that might come along in the night. Both good and bad dreams would be caught by the web, but only good dreams could find their way through the hole and slide down the feather to the baby’s head. The bad dreams, not knowing the way, would get caught in the web and dissipate with the first rays of morning light.

Since the beginning, many Native American tribes have adopted the dream catcher and incorporated it into their heritage. The Lakota are one such group that have done this. The following is their story of the dream catcher:


Legend of the Dream Catcher (Lakota)

Long ago an old spiritual leader was high on a mountain and had a vision. A teacher of wisdom appeared in the form of a spider. The spider picked up the elder’s willow hoop and began to spin a web. She spoke to the elder about the cycles of life. She said, “In each time of life there are many forces, some positive and some negative. If you listen to the positive forces, they will steer you in the right direction. If you listen to the negative forces, they will lead you astray.”

When the spider finished speaking, she gave the elder the web and said. “The web is a perfect circle with a hole in the center. Use the web to help your people reach their goals, making good use of their ideas, dreams and visions. If you believe in the Great Spirit, the web will catch your good ideas, let them float through the hole and down the feather upon you.” The elder passed on the vision to the people. Now, many hang a dream catcher above their bed to sift their dreams and visions. The good thoughts are captured in the web of life and dropped down to the person, the negative thoughts are caught in the web and perish at daybreak, never to be a part of their lives.

Now, I don’t know about you, but I would really like to adopt this concept! Who’s with me? Okay, let’s make some dream catcher pendants to wear to catch those good dreams from the air, let them float down into our hearts! 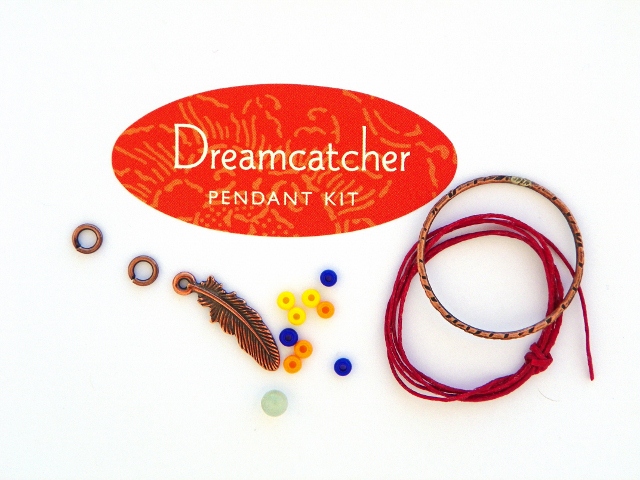 A kit containing all the materials needed and instructions can be found in my Etsy shop here.


Tools:
Scissors
A pair of chain nose pliers (to attach the jump rings)

Instructions:
1. Use the cord to make a 1” fold at one end. Use the folded end to form a lark’s head knot around the copper ring as shown in photo 1. 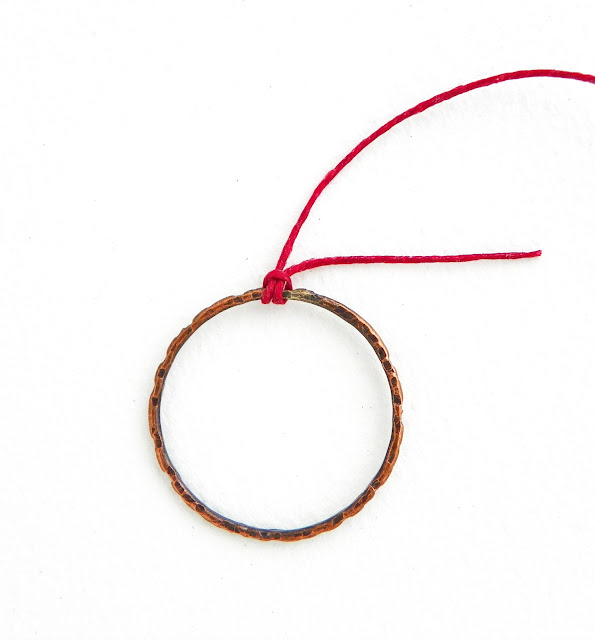 2. Using the long end of the cord, form a half-hitch knot around the copper ring and the 1” tail as shown in photo 2. 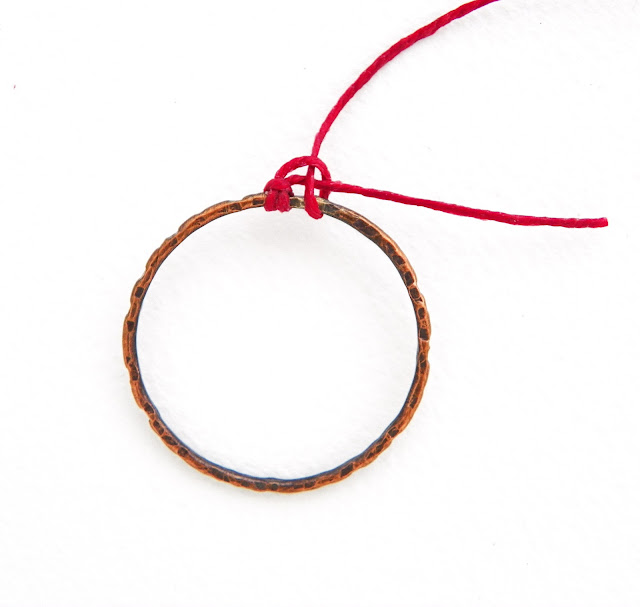 3. Trim the tail. Pull the cord down so that it sits on the inside of the copper ring as shown in photo3. 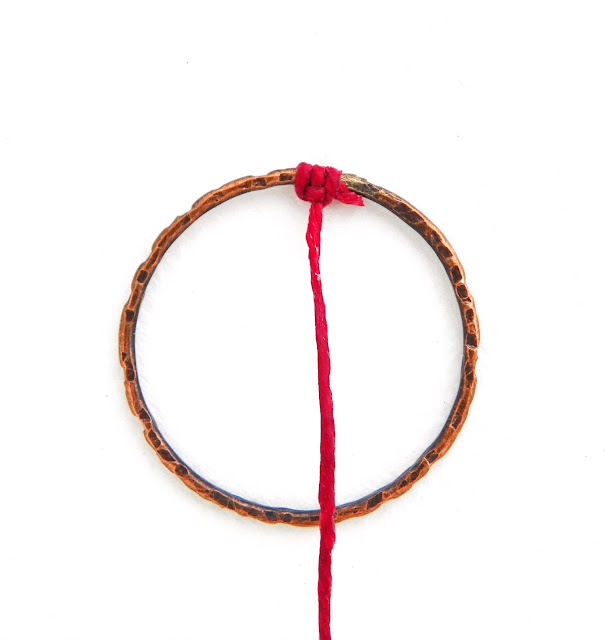 4. Bring the cord around the copper ring and through the loop as shown in photo 4. This is called looping. Continue making loops around the ring 5 more times. Add seed beads as desired. 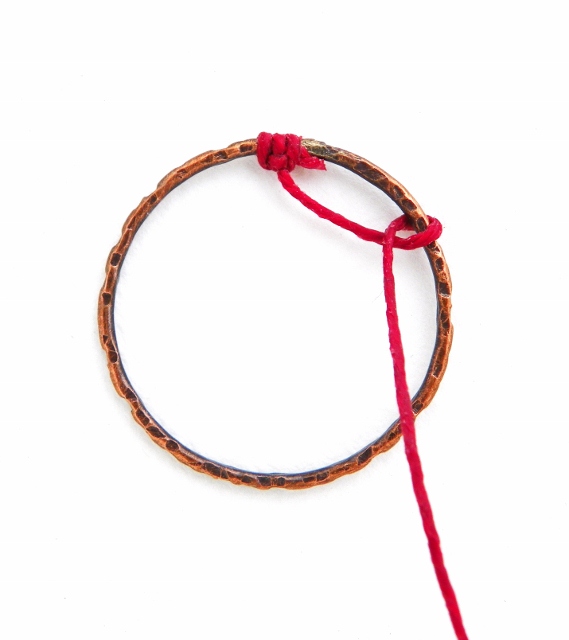 5. Bring the cord around the first loop created in step 4 and through the loop as shown in photo 5. 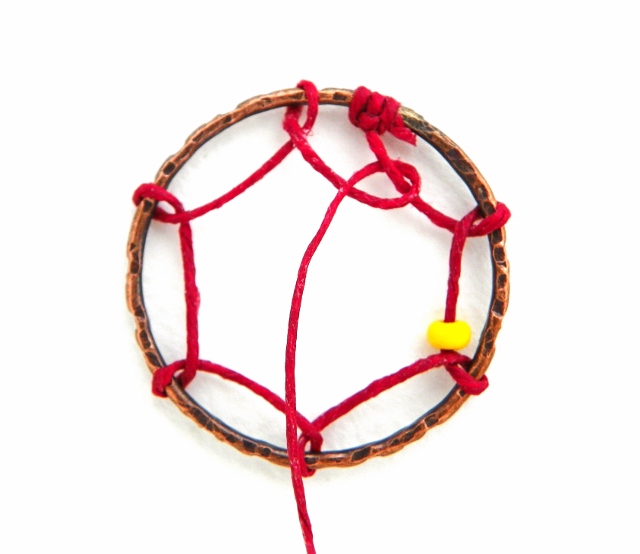 6. Continue looping in the same matter adding seed beads as shown in photo 6. Loop around the inner diameter of the ring twice. 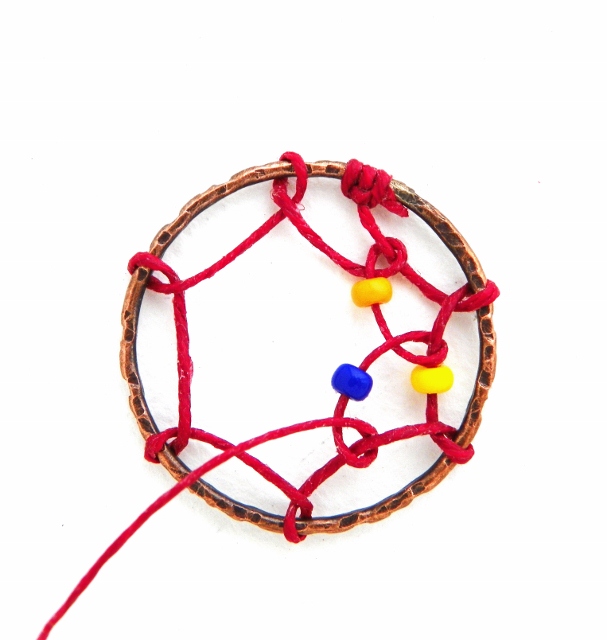 7. Use the cord to string one 4mm bead; tie and overhand knot and trim cord as shown in photo 7. 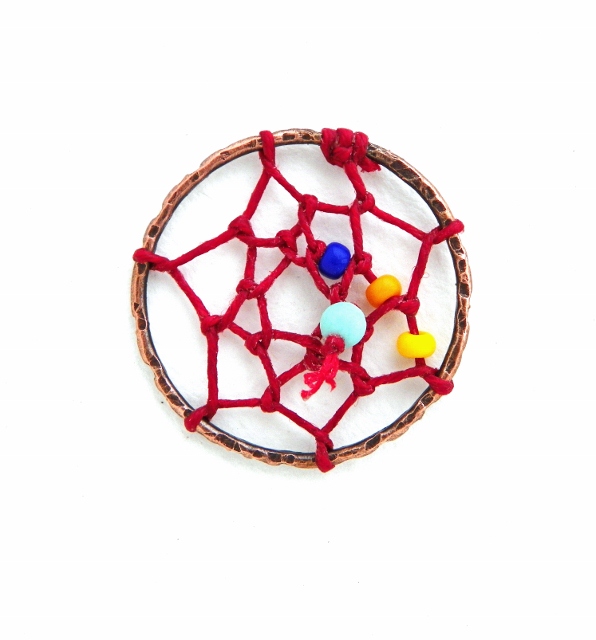 Hi There! Thanks for stopping by... 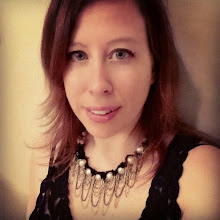 Get My New E-Book! 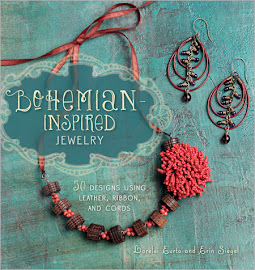 Erin Siegel
Salem, Ma., United States
I'm a jewelry designer, author and teacher living in Massachusetts with my husband and daughter. I love to create fun, fashion-forward jewelry for everyday wear. I especially enjoy creating knotted jewelry. I often incorporate various kinds of fibers in my work such as waxed linen cord, leather, silk knotting cord and ribbons. I'm co-author of the book, Bohemian-Inspired Jewelry: 50 Designs Using Leather, Ribbon and Cords published by Interweave 2012. My jewelry designs have been featured in beading magazines including Jewelry Stringing magazine, Create Jewelry and Belle Armoire Jewelry. I also design and write jewelry projects and tutorials for Ornamentea.com. I've appeared on the television show Beads, Baubles and Jewels. I teach jewelry-making in person as well. I have taught classes and workshops at national events and retreats such as Bead Fest, artBLISS, and Bead Cruise. 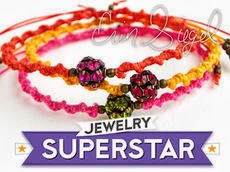